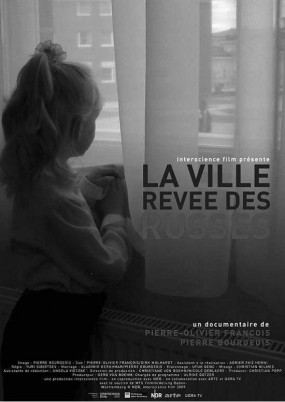 In the middle of Russia, 3000 kilometers east of Moscow is Khanty-Mansiysk, the capital of a region the size of France. This small town is has around 60 000 inhabitants. The area contains 60% of Russian oil, more than 7% of world’s ressources. It is here that Russia takes its wealth, its pride, which is then shown on the international stage by the Moscow leaders, and that allows the residents
of Khanty-Mansiysk to live comfortably. In the region, Khanty-Mansiysk is called the second Moscow.

Four years ago Pierre-Olivier François and Pierre Bourgeois had heard for the first time of this unknown town beyond the Urals. They went there.
The place they have found is as far from the Russian attention as from the international one. 15 years ago, it was nothing else than a small village with no name on the road to Tsarist exile or to the gulag, a lost place surrounded by water, mud and forests in summer while covered with snow in winter. Since then, wooden isbas are endangered, replaced by churches, museums, towers, villas. An
oasis of welfare almost too good to be true when we know the problems that beset Russia.

It is this showcase that in June 2008 the brand new Russian President Dimitri Medvedev has chosen as the place of his first major international summit, the European Union-Russia summit. It is the Siberia he wanted to show to the West.

The film intertwines life of characters and notes of the authors like in a travel book. A travel book which relates the other Russia which wealth reflects somehow all the problems of great Russia. In its own way, Khanty-Mansiysk undermines many western myths about the Russia in general and Siberia in particular. It is a world unto itself and that is a microcosm revealing the strange mixture of state capitalism and Soviet rituals marking Russia today. Khanty-Mansiysk is perhaps the city of which the Russians dream, a metaphor of the future of this great
country – should we like it or not.