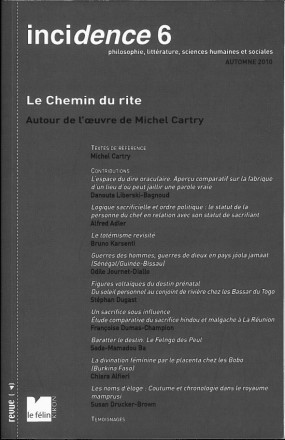 "The path of ritual. On the work of Michel Cartry"

"The path of ritual. On the work of Michel Cartry", Incidence, no. 6, October 2010 with the collaboration of Danouta Liberski-Bagnoud, ethnologist, CNRS, member of the Nantes IAS scientific advisory board.

"The path of ritual. On the work of Michel Cartry" is a commemorative volume in honour of the ethnologist and Africanist Michel Cartry, who passed away on 18 August 2008. It comprises some of Cartry’s own texts, mostly published here for the first time, and essays and tributes by friends and colleagues who, inspired by these texts or other better-known ones, have followed in Cartry’s pioneering footsteps, and here retrace his intellectual trajectory or take his thinking further. All the contributions convey how profoundly the field of ethnology is endebted to Michel Cartry’s work. Cartry was the first, along with Luc de Heusch, to study the thought systems of Black Africa. He did not seek to reconstruct an older social order - for he understood that while the societies concerned were extraordinarily vigorous they had been irremediably emasculated - but rather to restitute categories of thought, as manifested in the language of a given society’s ceremonial activity.

In his constant endeavour to tease out what in our own thinking prevents us, as Western subjects of science, from grasping what Marcel Mauss called different versions of the conception of the world, Cartry was poles apart from a cultural relativism which champions indifference, and hides behind this position to evade any reflection on alterity (thus admitting its incapacity to do so). In Cartry’s view, every ethnologist is called upon to identify the metaphysical postulates he brings into the field through his language, without which the logic at work in the phenomena he is studying (be they religious, social, political or economic) will remain forever beyond his grasp. However, the philosophical vigilance which Cartry practised so superbly was the complete opposite of the - less demanding, it is true - radical intellectual posturing which has invaded the human and social sciences, and which decries and deconstructs, with no other aim than to exercise a new form of censorship over the thinking of the time.

Cartry’s acute awareness of the normative character of language was crucial to his method, as was his constant problematisation of how to write the speech of the other, and in particular the singular speech accompanying ritual. Ritual utterances are a singular form of speech, since by definition they entertain a complex relationship with gesture, which is the other facet of the ritual act and contributes to its overall meaning. Gestures in ritual are less easy to translate into text, and, in their links with speech, pose immense problems to any observer seeking to describe them. Michel Cartry’s work, with its scepticism regarding claims that anthropological fact can be modelled - and its criticism of the effects of attempting to do so - will have succeeded in foregrounding the fact that the very description of a ritual poses theoretical problems even more intractable than its interpretation.