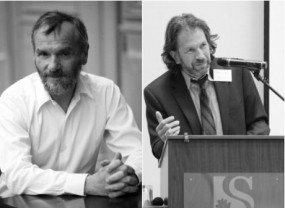 Solidarity and work: what are the prospects for Greece?

Discussion between Alain Supiot and Emilios Christodoulidis - On May 17th, 2015

Alain Supiot and Emilios Christodoulidis discuss the questions of solidarity and the protection of work in Greece.

Emilios Christodoulidis: Alain, thank you for joining me in this discussion over the urgent questions that Greece faces today, with special reference to the questions of solidarity and the protection of work.

It is often repeated now that Greece has run out of options and it is painfully clear that in “negotiating” its future with its partners it is running out of road. The EU’s unyielding stance in its collision course with SYRIZA’s democratic mandate threatens to defeat both Europe’s project of solidarity and Greece’s of democracy. As the philhellene and sympathetic observer that I know you are, how might one begin to assess the prospects for solidarity and democracy in our ‘ever closer union’?


Alain Supiot: The ideal of solidarity has enjoyed great prominence for over two centuries in our sociological and political imaginary but has only recently been adopted as a general principle of law by the Court of Justice and a fundamental right by the European Charter Certainly, at the European level, solidarity possesses nothing like the intensity it does at the national level.
It was at this latter level that solidarity developed via the many forms that the Welfare State assumed in each country after the Second World War in Europe. The problem with the European Union, as the German sociologist Fritz Scharpf rightly observed, is that it pushed for the dismantling of national solidarities without being able to build solidarity at the supranational level. This “cocktail” can be nothing but fatal for the project of the European Union, whose renunciation of all social ambition – in particular the objective of ‘harmonisation through improvement’ of social protection as stipulated in the Treaty (Art. 151) – is bound to ruin the little credibility and political legitimacy that it still enjoys.

To recognise that there are degrees of solidarity would allow it to re-articulate solidarity at the local, national and continent-wide levels. In the absence of such an articulation, the European Union runs the risk of an explosion of conflictual solidarities on the basis of nationalist, religious, etc, identifications nurturing the contempt of the one side and the resentment of the other.

The evident design-fault of the European currency union, for one, demands mechanisms – such as that of the parallel currency that would decouple the medium of exchange from the unit of account - that establish degrees of solidarity between the states of the Eurozone, rather than pursuing the spectre of the imposition of the economic and monetary model of Germany on the rest of Europe.