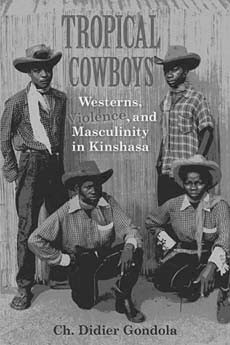 Publication of "Tropical Cowboys.Westerns, Violence, and Masculinity in Kinshasa" by Charles-Didier Gondola

Charles-Didier Gondola, Fellow  2011-2012  at the IAS-Nantes released his book Tropical Cowboys.Westerns, Violence, and Masculinity in Kinshasa with  Indiana University Press.

Charles-Didier Gondola is Chair of the History Department and Professor of African History at Indiana University-Purdue University, Indianapolis. He is editor (with Peter J. Bloom and Charles Tshimanga) of Frenchness and the African Diaspora: Identity and Uprising in Contemporary France (IUP, 2009).

His  project for which he obtained a Eurias fellowship from the Nantes Institute for Advanced Study, explores youth power, Western movies, and masculinities in Colonial Kinshasa turned into a book and was released earlier this month.

Description of the book:

During the 1950s and 60s in the Congo city of Kinshasa, there emerged young urban male gangs known as “Bills” or "Yankees." Modeling themselves on the images of the iconic American cowboy from Hollywood film, the “Bills” sought to negotiate lives lived under oppressive economic, social, and political conditions. They developed their own style, subculture, and slang and as Ch. Didier Gondola shows, engaged in a quest for manhood through bodybuilding, marijuana, violent sexual behavior, and other transgressive acts. Gondola argues that this street culture became a backdrop for Congo-Zaire’s emergence as an independent nation and continues to exert powerful influence on the country’s urban youth culture today.