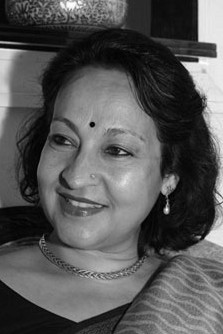 On Tuesday May 13th 2014 at 6:00pm at the Simone Weil Amphitheater.
NB: lecture in English

Dr Maina Singh is a Scholar-in-Residence at the American University in Washington. She works on colonial and contemporary India, especially on Indian Diaspora communities and cross-cultural identities.

Maina Singh obtained her PhD with a doctoral research focusing on gender, colonialism and the cross-cultural work of American women missionaries that was published in 2000 as Gender, Religion, and “Heathen Lands": American Missionary Women in South Asia (1860s – 1940s). Since then, she has lectured at Cambridge, Oxford, Yale, Cornell and the Library of Congress (Washington DC). Dr. Singh has spoken widely at American campuses and to Jewish community groups about Indian Jewish identities. Currently, Singh lectures on topics related to ’Contemporary India’, ’The Indian Diaspora’ and ’Contemporary Israeli Society’.

Her recent book  Being Indian, Being Israeli : Migration, Ethnicity and Gender in the Jewish Homeland (New Delhi: 2009; 2010), based on extensive fieldwork conducted among Indian Jewish communities in Israel, examines issues of ethnicity, migration and Indian diasporic identities.

Today, Indian diaspora communities are spread over 110 countries, stretching across all oceans and continents. Their remittance is estimated at 70 billion dollars. These  ’Global Indians’ are over 20 million strong. In 10 countries they exceed the half million mark.

Yet, what do we know about Indian Jews in Israel ? Indian Americans in US politics? Or, fourth-generation Indians in Guadeloupe?

Indian-origin communities are marked by immense diversity. Chronology, history, geography and spatial dispersion have all shaped their post-migration lives. Nationalism, immigrant policies and perception of the ‘other’ have facilitated or hindered their integration in ‘host’ societies. Their own negotiations with identity, community-building and inter-generational cultural transmission are reflected in their contemporary diasporic formations.

Drawing from primary ethnographic research conducted in Israel, The United States and Guadeloupe, this presentation will examine three less-known Indian-origin communities to reflect on issues of migration, and integration ; mobility and mobilization as diaspora communities evolve their identities in relation to social and economic structures in their adopted ‘homelands’.

Findings reveal that concepts of ’home’ and ’homeland’ ; self and Other, remain dynamic and contested, yet also capable of generating powerful notions of belonging to an ‘unseen’ homeland.