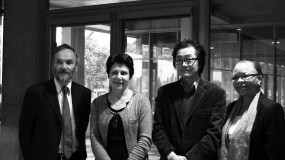 In agreement with the International Labour Organisation (ILO), the French Ministry of Labour, Employment and Health decided to fund experimentally a chair "France-ILO" in the Nantes Institute for Advanced Study. This chair will host researchers whose excellence is reflected in their earlier work and whose projects are likely to contribute to a better intelligibility of labor issues in the broad sense of "decent work".

This chair is open to scientists of all nationalities and all disciplines who will thus have the opportunity to come and live in France, during one academic year and to build lasting relationships not only with other fellows of their promotion but also with the best teams of French and European research on labour, employment and social protection, as well as the International Institute for Labour Studies of the ILO.

The labour issues are subject to the invitation policy of the Nantes IAS since its beginning. Since October 2010, the Nantes IAS and the International Labour Office are engaged in a partnership agreement entrusting the Nantes IAS to organize a multi-year cycle of international meetings intended to renew and deepen the study of the humanization of work since 1919 (Talks 2011, "The meaning of work") . These meetings, included in the preparation of the Centenary of the International Labor Organization, bring together every year fifteen experts in various disciplines from around the world. The next one will be organized in partnership with the Centre of Excellence Re:work of the Humboldt University, and will be held in Berlin on May 3-5, 2012.

The first to hold the Chair "France-ILO" in the Nantes IAS is Jeseong Park , researcher at the Korean Institute of Labour and he is staying in the Institute until the end of June 2012.