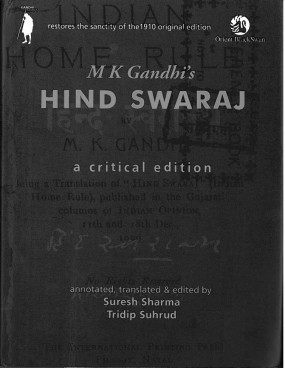 Hind Swaraj, Gandhi’s seminal text in Gujarati, was written between 13 and 22 November 1909 aboard the Kildonan Castle bound for South Africa. It is a dialogue on modern civilisation, composed at a moment in modern history when the pre-modern in the world beyond Europe could still be touched and spoken of, not as mere memory or longing but as a living form. As a mode of exposition and argument, Hind Swaraj stems from a cognitive universe that abides beyond the ambit of modernity. It is perhaps the only critique of the modern order that seeks an understanding of its salient facts. Its referents are tradition and modernity, the ancient and modern, ethical-moral and instrumental-effi cient. Hind Swaraj is a plea for non-violence as a mode of self-affi rmation and resistance against oppression and injustice. For anyone engaged with the life and thought of Gandhi and with the question of the meaning of life within the modern order of things, Hind Swaraj remains a critical text.

This critical centenary edition is intended as a renewal of a deeper engagement with the text and the discourse around it. It reinstates the 1910 edition of the English rendering and the original in Gujarati as the fi rst textual referent in conversation with the 1921 edition and the authorised second edition of 1939. It is presented along three axes: marginnotes (alternative readings/translations of the Gujarati original), footnotes (notations for categories-concepts) and Hindi translation (to mute the current placement of English as the exclusive mediation between languages). This is also the first edition of Hind Swaraj in two languages.

Suresh Sharma is a historian and anthropologist. He is Senior Fellow and Professor at the Centre for the Study of Developing Societies (CSDS), Delhi. Currently, he is working on a commentary on Gandhi’s Hind Swaraj and a comparative reading of St Augustine’s Confessions and Gandhi’s My Experiments with Truth. Suresh Sharma has been fellow at the Nantes IAS in 2009.

Tridip Suhrud is a political scientist and cultural historian, working on the Gandhian intellectual tradition and the social history of Gujarat of the nineteenth and twentieth centuries. Currently, he is Professor at the Dhirubhai Ambani Institute of Information and Communication Technology, Gandhinagar, Gujarat. At present, he is working on the English translation of Govardhanram Tripathi’s four-part novel Sarasvatichandra.