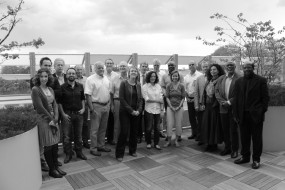 "The purpose of this workshop on the emergence of HIVs was to offer a platform for specialists of natural sciences and social scientists to interact and share their research. We initially thought, and have not budged on the issue, that it would take the collaboration and conversation among scientists, social scientists, and historians, maybe not to find the smoking gun, but at least to identify when and how different mechanisms contributed to the emergence and propagation of HIVs.
The outcome of these two days of intense discussion is quite positive. Scientists have learned that conceiving a theory, let's think of molecular clock for example, could not be done in a vacuum and without examining the specific events and patterns that unfolded on the ground. It also became clear to them that certain taken-for-granted terms such as "prostitution" and "marriage" should be defined within a larger gamut. Those scientists who proposed "serial passage" (i.e. non-natural transmission) as a transmission model gained a better understanding of the social context in Central and West Africa.
For social scientists and historians, it was important to get the science right. One main issue of contention had to do with the use of terms such as "ground zero" and "epicenter" to define Kinshasa's role in propagating HIV1. Yet, Kinshasa and Congo, in general, have witnessed relatively lower seroprevalence even though HIV1 may have started there. Being the epicenter does not necessarily imply the most severe prevalence rate. Most of them also understood quite well the "sequencing" from "jump" (or crossover from simian to human), to adaptation (through "serial passage" or common zoonosis), to "spread" (the actual transmission that led to the human pandemic).
The most important outcome, however, came as a resolution to establish a network of researchers from all disciplines who have a vested interest in the topic of HIVs emergence. We plan to have a follow-up conference in Geneva or New York in 2013. In the meantime, the group of historians plans to submit additional drafts for publication."