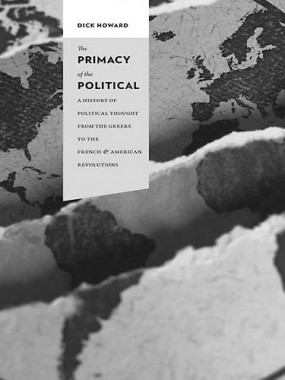 Dick Howard proposes, at the conference, an analysis of the dilemmas of contemporary political thought, at first with some reflections on our current political situation before coming to the presentation of the findings of his latest book, The Primacy of the Political. A History of Political Thought from the Greeks to the American and French Revolutions (Columbia University Press, 2010) :

"The conflict between politics and antipolitics has replayed throughout Western history and philosophical thought. From the beginning, Plato’s quest for absolute certainty led him to denounce democracy, an anti-political position challenged by Aristotle. In his wide-ranging narrative, Dick Howard puts his dilemma into fresh perspective, proving our contempory political problems are not as unique as we think.
Howard begins with democracy in ancient Greece and the rise and fall of republican politics in Rome. In the wake of Rome’s collapse, political thought searched for a new medium, and the conflict between politics and antipolitics reemerged through the contrasting theories of Saint Augustine and Saint Thomas. During the Renaissance and Reformation, the emergence of the modern individual again transformed the terrain of the political. Even so, politics vs. antipolitics dominated the period, frustrating even Machiavelli, who sought to reconceptualize the nature of political thought. Hobbes and Locke, theorists of the social contract, then reenacted the conflict, which Rousseau sought (in vain) to overcome. Adam Smith and the growth of modern economic liberalism, the radicalism of the French Revolution, and the conservative reaction of Edmund Burke subsequently marked the triumph of antipolitics, while the American Revolution momentarily offered the potential for a renewal of politics. Taken together, these historical examples, viewed through the prism of philosophy, reveal the roots of today’s political climate and the trajectory of battles yet to come."