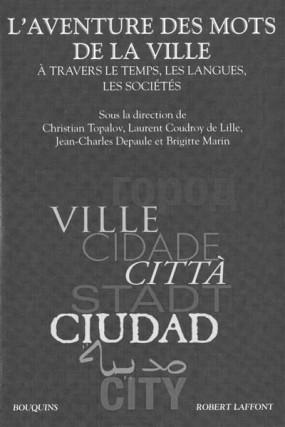 "The Adventure of city words " Conference of Christian Topalov, in association with the MSH Ange-Guépin More about >

Christian Topalov will introduce us the conclusions of his latest book, The Adventure of city words (Robert Laffont, collection Bouquins, 2010):

Do not believe that city words describe simply the thing they refer to: they classify them in categories, assign them significations, sometime give them values. All it takes to be convinced is to try and translate them: it is generally impossible - even if it is often done. It is enough, as well, to have the curiosity to find out what a word about the city might have meant in the past: often something very different. Thus, we tell in this book the adventure of words. They travel in time, changing their meaning without changing their appearance and these changes are part of the social history of cities allowing us to observe them from an original point of view. They also travel in space, sometimes from one language to another, they come and go. Erudite research which allows us to reconstruct such stories are full of amazing discoveries, often hilarious - much in the same way as those who endlessly use and recreate words, make light of heritage, concepts, etymologies.