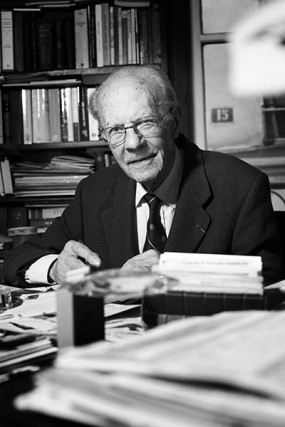 "Secularism and the 1905 Act on the Separation of Churches and State" Conference of Emile Poulat, in association with la Maison des Sciences de l’Homme Ange-Guépin

Alain Mine believes that the 1905 Act should be amended. Many say so and think like him. On the contrary, Jean-François Coppé judges that it should not be changed. Many share his belief. Cardinal Barbarin recalled that it had been amended several times: in fact, very precisely fifty times in a century. We can, but should we? This is the issue with, said or not said, what feeds it: Islam and Muslims in France, a country of old Catholic tradition constitutionally secular.

Apparently, we are faced with an alternative: Should we or should we not? In reality, there is an urgent need to break this vicious and illusory alternative to consider: Secularism and the 1905 Act, what are we talking about?

Emile Poulat is a historian and sociologist. Director of studies at the Ecole des Hautes Etudes en Sciences Sociales, founding member of the Sociology of Religion’s Group, member of steering committees or editorial boards of several journals, including "Politica Hermetica", he is the author of nearly thirty books mainly on the conflict between Catholic culture and modern culture in the history of contemporary Catholicism.