Recherche
Facebook
Twitter
LinkedIn
YouTube
Intranet
road_vous_etes_ici
Home
>
News
>
"Scene of comedy with a tragic hero: the iconography of vases and the difference of genres in the Greek theatre." Conference by Luca Giuliani 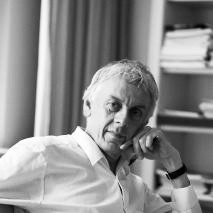 "Scene of comedy with a tragic hero: the iconography of vases and the difference of genres in the Greek theatre." Conference by Luca Giuliani

Greek vases occasionally show images of theatre productions: we see actors in grotesque costumes and masks, performing actions that provoque laughter. What exactly makes an audience laugh is sometimes hard to understand for an outsider. Comedy is generally considered to be a light genre; but its jokes and double meanings are deeply context dependant and rooted in a specific culture; this makes comedy, despite all its lightness, a peculiarly difficult genre for historical interpretation. At the same time comedy is able to laugh about itself, and thereby gains a reflexive capacity that can go far beyond that of a serious genre like tragedy.

Luca Giuliani studied Greek and Roman archaeology, social anthropology and Italian literature in Basel and Munich. He received his PhD in Basel in 1975. From 1982 to 1992 he was a curator at the Antikensammlung in Berlin. Between 1992 and 1998 he was Professor of Greek and Roman archaeology at the University of Freiburg and from 1998 to 2007 at the Ludwig-Maximilians-Universität Munich. Since April 2007 he has been the Rector of the Wissenschaftskolleg zu Berlin (Institute for Advanced Study) and Professor at the Humboldt-University in Berlin.