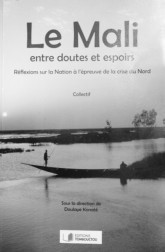 The Round-table conference is following the publication of the book "Mali : entre doute et Espoir : Réflexion sur la nation à l’épreuve de la crise du Nord" (’Mali, between Doubt and Hope : a Nation facing the crisis in the North’) published by Editions Tombouctou. The discussion will gather Doulaye Konaté, who directed the book, and Ousmane Sidibé, former Fellow of IAS-Nantes and contributor to the book. The round-table conference will be presented by Ibrahima Thioub, historian, Associate Fellow of the IAS-Nantes.

" Inheritor of prestigious empires (Ghana, Mali, Songhay), melting pot of people and ancient cultures, home of ’diatiguiya’, was Mali resting on its laurels ? In January 2012: yet another Tuareg rebellion, Islamic insurgency: pillaging, raping and stealing… In March 2012: military coup, indecision of institutions, violence… Mali is on its knees and questions itself. At the request of the Editions Tombouctou, scholars, researchers, writers were invited to an inter-generational and multidisciplinary dialogue away from prevailing false news and denial in order to exchange their views and visions about a wounded country, a war-torn nation and a humiliated state. Mali is thus revisited through its history, societies, cultures and diversities, its territory, its transformations, its different crisis and conflicts, its choices and ambitions with respect to governance, its perspectives of rebuilding and renewing perspectives.

The book is intended for those who wish to understand how was Mali ruined and why it will recover."

Collective work edited by par Doulaye Konaté, the book is comprised of two parts. On the one hand, it deals with the organisation of the Tuareg society and its relations with the other Northern communities and the central Malian State and on the other hand, the book deals with the State and the democratic project of Mali. The book brings together the contributions of Souleymane Drabo, journalist; Moussa Sow, anthropologist and writer; André Bourgeot, anthropologist; Balla Diarra, geographer; Mohomodou Houssouba, linguist and writer; Abdoulaye Idrissa Maïga, engineer; Ousmane Oumarou Sidibé, legal scholar; Abdel Kader Dicko, legal scholar; Oumou Ahmar Traoré, writer; Amadou Kéita, legal scholar and writer; and Doulaye Konaté, archeologist and historian