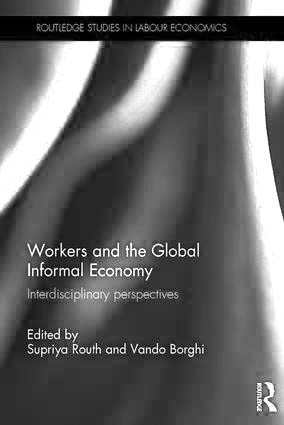 Supriya Routh and Vando Borghi were both Fellows at the IAS-Nantes in 2013-2014 and following a workshop , which took place last year at the Institute, they published in collaboration with other Fellows the book "Workers and the Global Informal Economy".

Having completed his fi rst degree of law from the University of North Bengal India, Supriya Routh went on to complete his LLM from the Vanderbilt University Law School, USA, on a Fulbright Fellowship. His ‘law and society’ PhD research from the Faculty of Law, University of Victoria, Canada, is an interdisciplinary study at the intersection of law, sociology and economics. Supriya Routh’s doctoral research focuses on informal economic activities in developing countries (with a specific focus on India) in order to ascertain if it is possible to improve conditions of informal workers with the help of reconceptualised capabilities developed by Ayartya Sen and Martha Nussbaum. He has published in law and social science journals internationally.

- the changing relationship between the public and private realms in contemporary welfare capitalism, with particular attention to the changing meaning of publicness in current practices of governance.

These specifi c research interests are interwoven with broader social theoretical interests, concerning developments in the individualization process, the perspective opened by the concept of capacity (and of “capacity to aspire”), the related concept of the “informational basis of judgment” (its relevance in the fi eld of labour issues, among others) and the relationship between sociology and critique in the context of the new spirit of capitalism.

Today, Vando Borghi is associate professor at the School of Political Sciences, University of Bologna, Italy.

Description of the book:

The global financial crisis and subsequent increase in social inequality has led in many cases to a redrawing of the boundaries between formal and informal work. This interdisciplinary volume explores the role of informal work in today’s global economy, presenting economic, legal, sociological, historical, anthropological, political and cultural perspectives on the topic.

Workers and the Global Informal Economy explores varying definitions of informality in the backdrop of neo-liberal market logic, exploring how it manifests itself in different regions around the world, and its relationship with formal work. This volume demonstrates how neo-liberalism has been instrumental in accelerating informality and has resulted in the increasingly precarious position of the informal worker. Using different methodological approaches and regional focuses, this book considers key questions such as whether workers exercise choice over their work; how constrained such choices are; how social norms shape such choices; how work affects their well-being and agency; and what role culture plays in the determination of informality.

This interdisciplinary collection will be of interest to policy-makers and researchers engaging with informality from different disciplinary and regional perspectives.