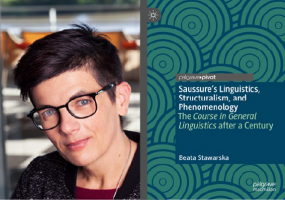 Publication of "Saussure’s Linguistics, Structuralism, and Phenomenology. The Course in General Linguistics after a Century" by Beata Stawarska.

The book is the first English-language vade-mecum written for an audience from any discipline, and reflects relevant scientific developments today related to the legacy and legitimacy of Ferdinand de Saussure’s 1916 Course in General Linguistics. It critically assesses the relationship between the documents of the Course and the linguist’s Nachlass (works unpublished or even unknown at the time of Saussure’s death, some of which have been recently discovered). This book takes a close look at the set of pairs of oppositions: signifier/signified, language (linguistic system)/speech, and synchrony/diachrony, which have become the hallmark of structuralism in all human sciences. Sometimes referred to as the "Saussurian doctrine", this hierarchical conceptual apparatus is revised in favour of a set of horizontal relationships, which simultaneously involve speaking subjects and linguistic structures. This book underlines the relevance of Saussurian linguistics in the 21st century, and highlights its legacy within structuralism and phenomenology. Readers may read this book alone, or in tandem with the 1916 Course.