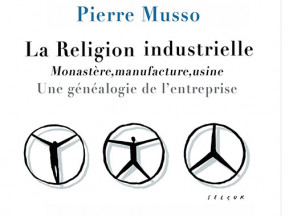 Summary of the book:

Industry is a vision of the world. More than just mechanization, it is large-scale intellectual machinery. We live by and believe in the "Industrial Revolutions” which have multiplied in the past two centuries.

This work takes a critical anthropological and philosophical look at the West itself. This Western selfie reveals its powerful industrial religion that has never before been regarded as such.

Industry absorbs everything around it. It holds together the cultural architecture of the west. Because the west does have a religion. The process of “secularization” has never really taken place. Religion cannot disappear: it is merely transformed. With the “Industrial Revolution”, a new technical and scientific “Christianity” has come into being.

This publication tells of the birth of a rational religion in the Christian matrix which has become our universal belief. The industrial spirit has seized the greatest mystery of the Christian West, that of the Incarnation, and has enshrined it in various great Bodies in order to transform the world: those of Christ, Nature, Humanity and the Computer.

Pierre Musso will explore the genealogy of industrial religion, highlighting three major changes of direction which were institutionalised in the monastery (11th-13th centuries), manufacturing (17th-18th C) then the factory (19th C), before the onset of the company (20th-21st C). Its development has been carried out over eight centuries and reached its peak with the “Managerial Revolution”, cybernetics and digitalisation.

Industrial religion has produced a philosophical corpus, a few encyclopaedic bibles, a powerful imaginary realm and a great theatre of production. It has been built in the shadow of the State and against political religion, and has been underground for a long time. Today, business carries and exports industrial religion while the State watches its political symbolism evaporating into thin air.

Register to the lecture