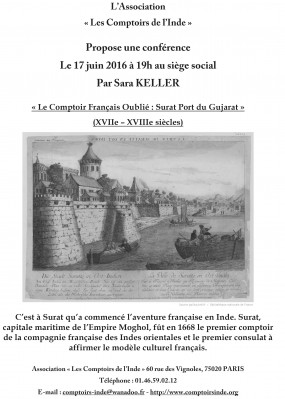 Friday,17th June at 7pm a the Association "Les comptoirs de l’inde" in Paris.

Dr. Sara Keller is a medieval historian and building archaeologist trained in France and Germany. In order to define complex socio-cultural contexts of the past, she explores a multidisciplinary approach based on the study of historical sources and the surveys of historical monuments and urban structures. She works since 2004 on the pre-modern architecture of northern India and specialized on the port cities of Gujarat and the East-West cultural and technological transfers which this cities host since several millennia. Dr. Sara Keller is affiliated researcher at the French Research Unit 8167 “Orient and Mediterranean” and at the Department of History of the Maharaja Sayajirao University of Baroda (Gujarat, India). She surveys the architecture and urban structures of the port towns of Gujarat (see the APIM data base) and leads actions for the diffusion of contemporary researches on past Indian ports and their impact for the commercial and cultural activity of the Indian Ocean.