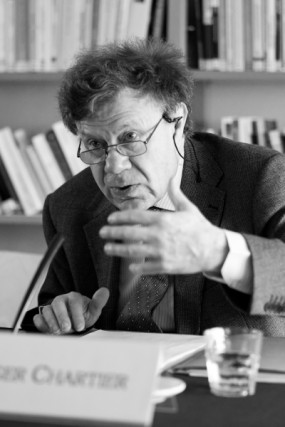 Monday 30th May at 5.15pm  in the Simone Weil Amphitheatre

Roger Chartier is a Professor at the Collège de France, he is a Director of Studies at the Ecole des hautes études en sciences sociales (EHESS), and he is also a Visiting Professor at the University of Pennsylvania.

His subject of research is the History of the Written Culture at the Modern Times.

HIis most recent books are:

The Author’s Hand and the Printer’s Mind, Cambridge, Polity Press, 2013.

If we disregard the 12 days which separate the calendars used in a Catholic country, such as Spain, and a Protestant country, such as England, in the 17th century (the former accepted the Gregorian reform while the latter continued to consider the Julian calendar as valid), the deaths of Cervantes and Shakespeare would have occurred on the same date, 23rd April 1616. Roger Chartier uses this coincidence to experiment with three kinds of interplay between fiction and historiography. The first consists of imagining an encounter between the two writers in the afterlife as, before he died, Cervantes had expressed a desire to see his “merry friends” again “happy in the next life”. The second essay, based on a narrative by Anthony Burgess in which the possibility of the same encounter born of the real event of the embassy sent by the King of England to the Spanish court in 1605 (a mission which could have included Shakespeare), describes the contacts between the literary cultures of the two countries in question, which were enhanced by the dissemination of a text as extraordinary as Don Quixote outside of Spain and even in England. Based on this observation, the third exercise analyzes the authentic phenomenon of the existence of a comedy – The History of Cardenio – written by Shakespeare and Fletcher in 1613, inspired by an episode of Don Quixote and now lost. Roger Chartier skillfully studies the play’s characters and develops what could be called “the real story of The History of Cardenio”.