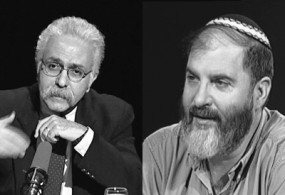 Lecture by Marc-Alain Ouaknin and Mohammad Ali Amir-Moezzi "Understanding the Scriptures. Avenues of interpretation of the sacred texts in Judaism and Islam"

Tuesday,31st May at 6.00 pm at the Simone Weil Amphitheatre

Born in Paris in 1957, Marc-Alain OUAKNIN is a rabbi and philosopher. His research focuses on the challenges of interpreting texts from the Jewish tradition, the multiple strategies for reading and producing meaning to guarantee man the conditions for his freedom. In the wake of Emmanuel Levinas, his work seeks to open up perspectives for the study of Judaism’s relationship with philosophy, the humanities, literature and the arts. His work aims to reveal dimensions of Judaism which are not widely known: textual eroticism, the fundamental role of questioning and renewal of meaning, the feminine and the dancing nature of thought, not to mention the centrality of humour. This can be seen in his books such as Le livre brûlé (1986), Lire aux éclats (1989), Concerto pour quatre consonnes sans voyelles (1992), Bibliothérapie (1994), La Bible de l’humour juif (2011).

Abstract of the lecture

The meaning of words and things is like perfume.  It unfurls into harmonics of meaning, into levels of multiple connotations, into new and unexpected connections, into fruitful intertextuality, into word play which mixes up meaning, sound and graphic convergences, an explosion of letters and numbers, anagrammatic spinning, a whole panoply of linguistic games which make each reading of the texts a deepened and renewed experience.

In the Jewish tradition, the location where this unfurling takes place has a name, Pardès – the garden or “paradise” of meaning, a word which is already in itself a play on words, the fruit of an acrostic of the four names which make up the traditional levels of interpretation: Pchat, Rémez, Drach and Sod, which are generally translated by the “literal meaning”, the “allusive meaning”, the “interpretative meaning” and the “secret meaning”.

The word Pardès is relatively rare in the texts of the Hebrew Bible, appearing only twice in the singular and once in the plural. Respectively in Canticle 4:13, in Nehemiah 2:8 and in Ecclesiastes 2:5.

Although already present in the Talmud to mean the place of the initiatory journey of the masters who “ascended into heaven” (Rachi and Tossefot on Haguiga 14b), it is from the Zohar onwards (13th century) and its commentaries that the word Pardès acquired the canonical meaning of the four levels of interpretation (Zohar, Genesis 26b).

Using many examples, I will analyze the different occurrences of this Pardès and will provide an analysis of these four levels of interpretation, demonstrating how the way of understanding and implementing them is always linked to an era, and always different depending on the authors who refer to and use them.

Mohammad Ali AMIR-MOEZZI is an Islamic scholar, professor of Arabic, a graduate of the National Institute of Oriental Languages and Civilizations, and doctor in Islamic studies from l’École Pratique des Hautes Études (Sorbonne). A specialist in Islamic theology and classical exegesis of the Quran, he is director of studies at EPHE where he holds the chair in “Exegesis and theology of Shia Islam”, and assistant director of the Center for the Study of Religions of the Book/Monotheisms Study Lab (CNRS-EPHE).

Abstract of the lecture

Islam defines itself as a religion of the Book, as the religion of the Book. Indeed, its scriptural texts, the Quran and the Hadith, have played an extremely central role in the constitution of its thinking, history and culture. We should point out that Muslim scholars, representatives of different religious groups starting with the Shiites, were quick to see the enigmatic, even problematic, nature of their scriptural sources, particularly the Quran. A disjointed and fragmentary corpus, often devoid of any narrative logic, the Quran requires, in the eyes of these scholars, exegesis or hermeneutics in order to become intelligible. We will explore the reasons for these problematic aspects – the why and the how of hermeneutics. How the existence of several levels of meaning encapsulating the spirit has been professed between the lines. Resources from other cultures (Jewish, Christian, Greek, Iranian, etc.) were exploited to reveal the hidden meaning(s) of the Book. Islam therefore very early on became a hermeneutic religion open to many intellectual and spiritual disciplines, ranging from law to philosophy, and including theology or mysticism.