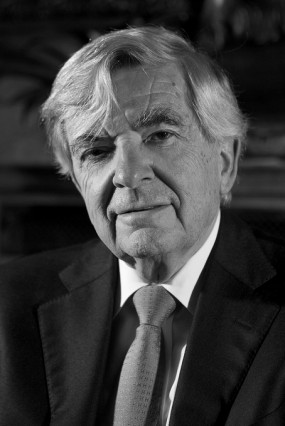 Lecture by Jean-Pierre Chevènement: "For another globalisation"

« It is safe to say that the commemoration in 2014 of the outbreak of the First World War will be instrumented for political purposes. On behalf of the slogan «Never again! » It will be for our leaders to justify the end of democracy in Europe in order to save it from its demons.

Although comparison are odious, it seemed enlightening to understand how Europe was gradually removed from history, to bring the two globalizations, the first before 1914 under British auspices, and the second since 1945, under American auspices, each asking the question of hegemony without which one cannot understand either the outbreak of the First world War or the current shift from America to Asia. The sudden acceleration of the decline of Europe is not only due to the two world wars that precipitated blind Pangermanism to the true interests of Germany. It mainly results from the demonization of those nations necessary to debilitating European institutions that allowed their progressive trusteeship by new "hegemon".

In order not to be marginalized in the new bipolar world taking shape between China and America, Europe needs to regain confidence in their nations to revive democracy and thereby become actively involved in its destiny. The Gaullist project remains ever so relevant, with a "European Europe " in the service of cultural dialogue and peace, a Europe compatible with the Republic , where France and Germany can work together to build a future of a Europe going from the Mediterranean to Russia .In a “reconciliation” finally purged of its ambiguities and its unspoken resentments: the two great nations can pursue together their history. »