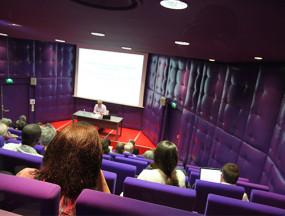 Building a common world? “Commons” as a political project

Under discussion will be the topic of “common goods” and “commons" as deployed at the French Development Agency (AFD). It is both a determining factor in public policy dialogue with southern partner countries as part of “governance” for which responsibility was transferred to the AFD by the Quai d’Orsay last year, and a seemingly decisive concept for imagining a “modern” (i.e., heir to the Aufklärung) way out of contemporary neo-liberal aphasia.

Gaël GIRAUD is chief economist for the French Development Agency (AFD), but also research director at CNRS and Jesuit, doctoral student in theology (Catholic). He is a former student of Ecole Normale Supérieure (rue d’Ulm), a graduate of the Paris School of Economics, Statistics and Finance (ENSAE), holds a doctorate in applied mathematics from Ecole Polytechnique, Professor of Economy at l’Ecole Nationale des Ponts et Chaussées, and director of the Energy and Prosperity Chair.

Interview of Gaël Giraud on the question of "commons" to the blog of the Agence Française de Development :  http://ideas4development.org/en/commons-development/