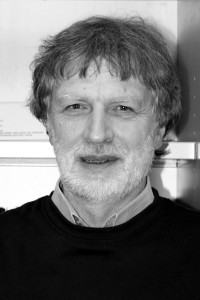 Lecture by Didier Demolin: "The origin and evolution of some speech and language features"

on Tuesday December 3rd 2013 at 6:00 pm in Simone Weil Amphitheater

Didier Demolin is a Professor of Linguistics, specialised in phonetics, experimental phonoly and biology of language. He is professor at the Stendhal Univeristy (Grenoble, France), member of the Gipsa-lab (Grenoble Images Parole Signal Automatique) and Director of the department "Systèmes linguistiques et dialectologie".

" This talk will be devoted to two topics in speech and language evolution. The first concerns a key element in human speech, i.e. the control of fundamental frequency (f0). The second is about the structure of non human primate vocalizations.

Even if non-human primates modulate f0 there is not much evidence that they do this independently of intensity. Therefore it is essential to understand the origin and evolution of this feature of human language. Indeed controlling f0 allows modulating pitch contours that are essential in prosodic, syntactic, semantic and pragmatic features of human language. The comparison between human speech and non-human primate vocalizations allows interesting observations. This could also provide some evidence to evaluate the origin and evolution of the f0 control. The voice source of chimpanzee and bonobo is quite unstable and there does not seem to be f0 modulations independent from intensity. In this prespective one point should be obvious, this is that, the generally unstable voice source with no independent f0 control of non human primates evolved towards a more stable and controlled voice source in humans.

The second part of this talk will raise address the following questions. Is human language unique among primate systems of communication in exhibiting syntax and recursion? The recursive, hierarchical embedding of language units minimally requires a ‘context free grammar’. This is more complex than the finite state grammars thought to be sufficient to specify the structure of non-human communication signals. Animals seem unable of learning and discriminating strings of a context free grammar from those formed by simpler rules. It will be shown that spontaneous combinatory calls of wild muriquis (Brachyteles hypoxanthus), a New World monkey, exhibit a grammar which is not only context-free but also context-sensitive. Thus, the capacity produce recursive, self-embedded grammars is not uniquely human. This finding suggests that some essential mental processes that make human language are shared with humans’ non-speaking cousins."