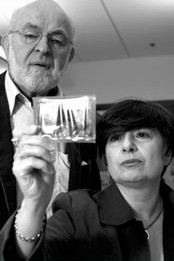 Lecture by Ana Soto and Carlos Sonnenschein : "From the cell to cancer : An evolutionary perspective of development and cancer."

Ana Soto and Carlos Sonnenschein are Professors of Integrative Physiology and Pathobiology at Tufts University School of Medicine (USA). They are internationally renown for their work on cancer, they have proposed the tissue organization field theory of carcinogenesis. It posits that carcinogenesis is a tissue-based phenomenon, rather than a cell-based phenomenon caused by DNA mutations.

In 2013-2014, Ana Soto holds the Blaise pascal Chair at the ’Centre international de recherches en philosophie, lettres, savoirs’ (International centre for research in philosophy, literature and knowledge - CIRPHLES) at Ecole Normale Supérieure. She currently works with Giuseppe Longo, Fellow at IAS-Nantes in 2013-2014, on some foundational principles needed to contribute to a new theory of organisms.

Ana Soto and Carlos Sonnenschein will give a lecture at the Institute on Tuesday, march 11th, at 6:00pm.

Explanations of carcinogenesis have been debated for over a century. Ana Soto and Carlos Sonnenschein will briefly make a historic and an epistemologic overview of the subject with special emphasis on the quality and relevance of the premises adopted by those favoring either a) the somatic mutation theory (SMT) and its variants or b) the tissue organization field theory (TOFT).

These theories differ on two main points: first, while the SMT considers that cancer occurs at the cellular and molecular levels of biological organization, the TOFT is centered at the tissue level of this same hierarchical organization. And second, while the SMT adopts the premise that quiescence is the default state of cells in metazoans, the TOFT adopts, instead, the premise that proliferation is the default state of all cells. Influenced by a reductionist narrative, the SMT considers cancer a molecular, genetic disease. In contrast, the TOFT adopts an organicist approach and proposes that cancer is an example of how development may go awry. Experimental evidence buttressing interpretations that considers cancer as part of a repertory of behaviors inherent to multi-cellular organisms will be evaluated and an attempt will be made to explain how cancer fits into life at large.