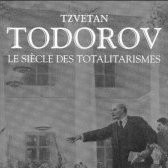 "Interview with Tzvetan Todorov about his book "The century of totalitarism" (Laffont, 2010)

Communism is the great secular religion of modern times, one that has guided the course of world history for one hundred and fifty years. As traditional religions, it promises its adherents salvation; but it heralds the advent of the latter on the earth and not in heaven, in this life and not after death. It responds to the expectations of millions of people plunged into distress due to poverty and injustice, and that can not be comforted by the promises of the old religions. Gradually, humanity must benefit from this red messianism.
Fascism, Brother Enemy, appeared first as a shield against communism before it attacked its Soviet rival.

We will found in this volume the major writings of Tzvetan Todorov devoted to the totalitarian phenomenon. He explores several aspects: its ideology, the metamorphoses of morality in the concentration camps, daily life in countries of "real socialism", the psychology of rescuers during the Second World War, the actual forms of memory of that painful past. The evocation of the great events of history is enriched by stories of less known individual episodes, with portraits of people, everyday heroes, and autobiographical digressions. For this edition, Tzvetan Todorov has written an extensive introduction, "The totalitarian past and present, " which situates his research in relation to each other and complete a review of new ideologies dominating our world, the democratic messianism and ultraliberalism.
This volume includes: Face à l’extrême (1991), Une tragédie française (1994), L’Homme dépaysé (1996, extraits) et Mémoire du mal, tentation du bien (2000).