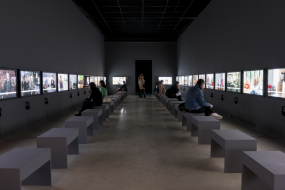 "In the same city, under the same sky..." project about migrations

Tuesday 4th October at 6pm at the Simon Weil amphitheater.

Discussion with Anna Konik, video artist, about her project "In the same city, under the same sky..."

Anna Konik, video artist and 2014-2015 Fellow at the IAS-Nantes,is coming back to present the most recent part of her project "In the same city, under the same sky..." realised during her fellowship with the help of Médecins du Monde and Nantes women.

This dicussion will be led by Magali Grollier, journalist, in the presence of the volunteers of the project and Médecins du Monde.

"In the same city, under the same sky... response to the reluctance shown towards immigrants and the tragedies that befall them on their way to Europe. All of the films focus on the authentic experiences of women seeking a home and a life away from war, terrorism, poverty, sexual oppression and violence. I filmed seven stories in Nantes courtesy of the organization Médecins du Monde. I spent several nights (from 9.30 p.m. to 4 a.m.) with its staff members, riding in a car from one group of women to another. I watched them hand out tea, coffee, contraceptives, and provide medical advice. I tried to talk to the women through the MdM staff members, explaining the idea of the project. While several agreed to share their life stories, most refused or expected money in return. The stories that made it into the project were recorded at the Médecins du Monde office in Nantes, as told by M from Cameroon, aged 40, on 11 February 2015; E from Ecuador, aged 39, on 13 February 2015; V from Nigeria, aged 28, on 17 February 2015; T from Romania, aged 27, on 18 February 2015; and G from Nigeria, aged 27, on 3 March 2015. The testimonies of two Roma women were recorded in their trailers in one of the three Roma camps in Saint-Herblain: L, aged 45, on 27 February 2015; and A, aged 18, on 9 March 2015." Anna Konik

"Borders – constructed and reinforced by nationality, race, and language – create barriers to belonging, meaning and empathy and call into being the Other – the refugee, the migrant, the illegal, the unwanted. In Konik’s monumental work, thirty-five women in Stockholm, Nantes, Istanbul, Bucharest, and Bialystok recount the life stories of thirty-five women from Afghanistan, Burma, Cameroon, the Congo, Chechnya, Ecuador, Ingushetia, Iraq, Kurdistan, Nigeria, Palestine, Romania, Somalia, Syria, and Turkey who have fled war, discrimination, or poverty to forge a new life. The voices and images in the videos confront us with critical questions: “Who counts as human? Whose lives count as lives? What makes a grievable life?” (Judith Butler, Precarious Life, 2004). Konik’s art probes the borders that separate individual lives."

The book "In the same city, under the same sky..." was  pulished last year thanks to financial support from: ZiF Center for Interdisciplinary Research, Bielefeld University; The Marga and Kurt Möllgaard-Stiftung; Institut d’Etudes Avancées de Nantes with the French Agence Nationale pour la Recherche under the program "Investissements d’avenir."

According to the Data Protection Act of January 6th, 1978, you have at any time, a right of access, rectification and opposition on your private information. You can contact us by filling in the contact form