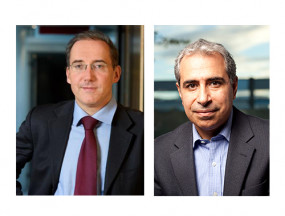 The Nantes Institute for Advanced Study has the honnour to announce the nomination of two new associate fellows: Gaël Giraud and Suleiman Mourad. Associate members contribute to the scientific direction of the IAS and regularly stay in residency at the Institute.

The nomination of Gaël Giraud fully fits within the partnership of the IAS-Nantes with the French Development Agency (AFD).

Chief economist for the French Development Agency, Gaël Giraud is also research director at CNRS and doctoral student in Catholic theology. He is a former student of École normale supérieure (rue d’Ulm), he graduated at the Paris School of Economics, Statistics and Finance (ENSAE), and holds a doctorate in applied mathematics from the École Polytechnique. He is Professor of Economy at l’École nationale des Ponts et Chaussées, and director of the Energy and Prosperity Chair. He has published fifteen or so research articles in Anglo-saxon academic reviews in economy, and four books including La Théorie des jeux (Flammarion, 2005), 20 Propositions pour réformer le capitalisme, (Flammarion, 2009), Le Facteur 12, pourquoi il faut plafonner les revenus, with Cécile Renouard (Carnets Nord, 2012) and Illusion financière (Les Éditions de l’Atelier, 2013).

Suleiman Mourad will be associate member from the 2018-2019 academic year and will thus stay at the Institute every for an average period of three months. The IAS-Nantes is glad to welcome its former fellow of the 2012-2013 promotion with whom the Foundation has forged lasting lies, materialised in the publication, by Fayard publiching, in the collection driven by IAS-Nantes « Poids et Mesures du Monde, of the book La Mosaïque de l’Islam (2016).

Suleiman Ali Mourad was a Fellow at the IAS-Nantes in 2012-2013, a year during which he notably wrote La Mosaïque de l’Islam (« Poids et mesures du monde », Fayard, 2016). He is Professor of Religion at Smith College, USA. His research focuses on Qur’anic Studies, on Jihad ideology, on the symbiosis between violence and non-violence in the founding texts of Islam and of Islamic history, and on the crisis in the modern iIslamic thought and the breaking with the past intellectual traditions. He is the author of Early Islam between Myth and History (Brill, 2006), co-author of The Intensification and Reorientation of Sunni Jihad Ideology in the Crusader Period (Brill, 2012), and co-editor of Routledge Handbook on Jerusalem (Routledge, 2018). He has B.S. (Mathematics) and M.A. (History) from the American University of Beirut, and M.Phil. (Religion) and Ph.D. (Arabic & Islamic Studies) from Yale University.

Currently, the other associate members of IAS-Nantes are:

Alain Supiot, Founder of IAS-Nantes and Director from 2008 to 2013, was elected as Emeritus Member by the Board of Trustees of the Institute.