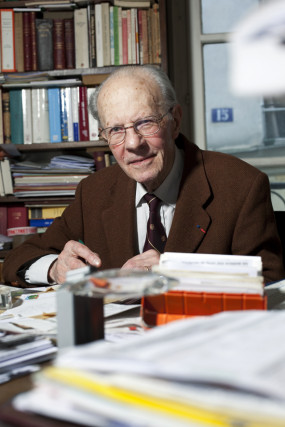 Tuesday 22nd November 2016 at 6pm in the Simone Weil Amphitheatre.

The sociologist and historian Émile Poulat (1920-2014) was one of the pioneers in the study of sociology of religion at CNRS. He leaves behind him a major work on contemporary Catholicism and its relationship with modernity. A specialist in the 1905 law on the separation of Church and State, he contributed to renewing the approach to secularism. Émile Poulat donated his personal library including several thousands of books and an extensive archive to IAS-Nantes. This collection of documents has been deposited with the Julien-Gracq research library which is jointly run by IAS-Nantes and MSH Ange-Guépin. The two institutions are committed to preserving and promoting these archives and making them available to researchers wishing to work on the questions which inspired Professor Poulat throughout his life, questions that recent political and religious developments prove to be of the utmost importance day after day.

This round table has been organized to mark the second anniversary of Émile Poulat’s death. After a brief review of the researcher’s life and work, a debate will be held on secularism and new forms of religion with four speakers:

Philippe PORTIER, director of Sociology of Religions and Laicity Group at CNRS

Andrea RICCARDI, founder of the Sant’Egidio Community, former minister of the Italian Republic