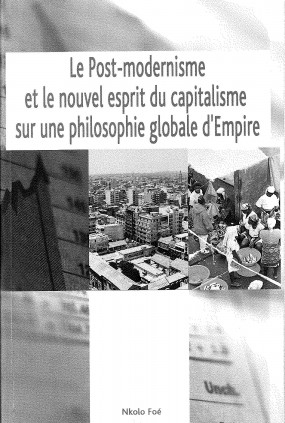 The idea for this book grew out of a controversy with some African youth fascinated by the civilization of the virtual. The author has sought here to make this generation doubt by demonstrating the secret of postmodernism which he describes as an ideology of globalization and free markets. The book shows that the postmodern era continues and performs structural era, and as such it is a philosophy of constraints. All of them show their totalitarian designs, while pretending to criticize the idea of totality. Destroying the myth that accompanies universalistic postmodernity, the book is in favour of a democratic universalism, based on the rehabilitation of common value. It concludes with a reflection on the problem of the failure of modernity, which this book locates on the level of the contradiction between the modern economy and social modernity, a refusal of the latter explaining the nostalgia anti and pre-modern and a conservative doctrine in the service of the polarization of the world.

Nkolo Foé is Professor of Philosophy and Head of Department of Philosophy, Ecole Normale Supérieure in the University of Yaounde 1. Former researcher at the Institut des Sciences du Cameroun, Expert Scientific Collaborator of the Agence universitaire de la Francophonie for the Pôle d’Excellence Régional du Rwanda (2004-2006), he was also a professor and researcher residing in PEA / House des Sciences de l’Homme de Nantes (2006) and Associate Director of Studies at the Maison des Sciences de l’Homme / Ecole des Hautes Etudes en Sciences Sociales in Paris (2008). He is the author of Sex of the State (Presses Universitaires de Yaoundé, 2002)