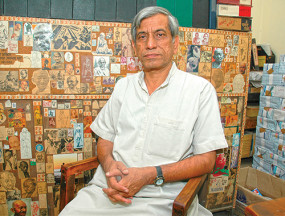 Eco-activist Anupam Mishra passes away at 68

In 2009, he was Fellows at the Intitute for advanced study and had given a lecture untitled "Millions of raindrops: water conservation in Rajasthan". He came back in 2011 for another public lecture on "The State, The Society & Water".

Below is a tribute to Anupam Mishra made by France Grand:

A Room with a View of Anupam Mishra

"Making the acquaintance of Anupam Mishra in his office at the Gandhi Foundation for Peace was straightforward: the room was a small space (that could accommodate at best 5 or 6 people) giving onto a garden. He sat at his desk, facing the door, surrounded by piles of the stapled papers that are so typical of Indian bureaucracy. Always dressed in white, with his amber look, greeting you in his lively and inquisitive manner. The walls of his office were coated in pictures, postage stamps, ten-rupee notes, calendars, wrapping, press cuttings, drawings, over-printed newspapers, leaflets, glued and re-glued, all to do with Gandhi. This alone was already an affirmation, a condensed portrait of Anupam’s character.

Another characteristic was his question “why not?”, a phrase I heard innumerable times. The response might equally have been a yes, or a no. It demonstrated neither bravado nor casual dismissal; on the contrary, it was a benevolent password that opened windows into possibilities, exchanges, a sign that would echo historical imagery: Gandhi in 1931, barefooted, clothed in a shawl and white dhoti, standing before the Queen of England, defying accepted dignity – Why not?

This was also the phrase that unlocked doors: I asked Anupam to advise me on a school visit, to help me understand and improve the working conditions for women in both past and present professions of beauty. What experiences, what culture, what dreams had I in common with these twenty-odd modest, young people, I worried. Why not?, was his response to my suggestion of tasking them with describing the most beautiful woman in the world? Aishwariya Rai, the Miss World of the hour, received two votes, all the other young women responded firmly with the answer ‘my mother’: They spoke to me of their lives. We were truly far from Paris.

Just a few days later, I met Nayantara Sehgal, daughter of Ranjit and Nan, the sister of Nehru. Did she remember her childhood at home during the struggle for independence? Yes, and how! As she wrote in her preface to the published collection of family letters: “There was never a trace or aura of command about Jawaharlal, Ranjit or Nan, and not one of them ever spoke to us in a voice raised in anger. They were democrats to the marrow taking no decisions concerning us without first holding a family conference presided over by the youngest member. This recognition of individual freedom and equality at a tender age left us free to grow identities of our own(…).It is a continual wonder to me how child oriented these people were, in circumstances where children might easily have been neglected”.

Here was a beautiful case of ‘why not?’ Is it a particularly Indian quality? A pledge of peace?

In the memory of Anupam Mishra, we could echo and apply this phrase, this simple question mark, this halt and password, amongst strangers as much as friends, our children, and even ourselves. WHY NOT?"