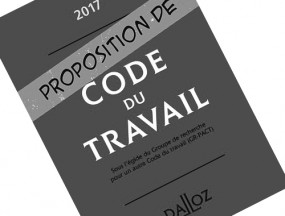 On Tuesday 10th October, the IEAoLU’s Tuesdays 2017-2018 season opened with Dominique Cardon’s conference on  "Algorithms and the predictable world" that you can replay on this page. Next IEAoLU conference promises to be as captivating : on November the 14th, Emmanuel Dockès will tackle the topic "For another labour code" :

« Labour law, which gained important ground in the 20th century, has been profoundly weakened in practically all of the OECD countries since the end of the seventies. France is carrying out this destructive agenda more slowly than other countries, but it is doing so nevertheless with perseverance and even pugnacity. This erosion which began in the eighties has continued pretty much constantly ever since. It was even speeded up with the major laws of the previous five-year presidential term and the summer ordinances. In this context, a group of twenty or so academics (Research Group for another labour code, GR-PACT), convinced of the need for a true labour law, wrote a progressive proposal for a new labour code (Dalloz, March 2017). This proposal is four times shorter than the current legislative part. Tailored to the reality of our times, it provides for radical reforms in all areas of labour law. »

After Emmanuel Dockès’conference, Alain Supiot will bring his contribution on the topic and will lead the debate with the audience.

Alain Supiot is professor at the Collège de France and emeritus fellow of the Institute of Advanced Studies in Nantes. His work has focused predominantly on two complementary fields: social law and legal theory. He is the author of a great number of publications, including Au-delà de l’emploi : les voies d’une vraie réforme du droit du travail (Flammarion, new edition 2016) and La Gouvernance par les nombres (Fayard, 2015). He has been nominated member of the Global Commision on the Future of Work by the International Labor Organization.

IAS’conferences, whether they take place at the Institute or at the Lieu Unique, are free and open to the general public, but you already can book a seat by filling up the form below.

IEAoLU’s Tuesdays are a series of public conferences organized in partenership with the Lieu unique, every month (at 6 pm) open to all and free of charge. The guest speaker gives a lecture on a major issue in today’s society with a strong international dimension, then one of the fellows from the IAS takes the floor to give an additional point of view. Subsequently, the audience take part in the discussion.

The IAS-Nantes also organises a series of public conferences which are free of charge and open to all, available on replay.

Register to the lecture