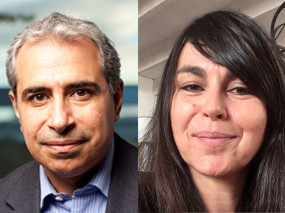 A new management team for the Nantes Institute of Advanced Studies

On 7th November the board of directors of the IAS-Nantes Foundation launched a procedure to fill the management roles at the institute prior to the start of the 2020/2021 academic year.This procedure was entrusted to an international panel which agreed the terms of tender (published on our website on 9th March) and interviewed the candidates. Following this process, and in accordance with the panel’s recommendations, the Foundation’s board of directors appointed Professor Suleiman Mourad as director of the Nantes Institute of Advanced Studies on 29th July 2020. Ms Rozenn Le Merrer was also appointed secretary general of the Institute on the proposal of Professor Mourad. This new leadership team will take up its responsibilities at the start of the coming academic year.

A specialist on the history of Islam and the Middle East, Suleiman A. Mourad received his PhD from Yale University, and holds an M.A. from the American University of Beirut. His scholarship focuses on the Muslims as makers and interpreters of their own religious, historical and legal traditions. As such, his major contribution to modern knowledge about Islam and Islamic history is that he demonstrated the active agency of Muslims in fashioning different forms of Islam from the seventh century until today. Since 2005, he has been teaching at Smith College, where he was the inaugural faculty director of the Global Studies Center. Since 2018, he is member associé at the Institut d’Études Avancées de Nantes. He is a former fellow of the National Endowment of the Humanities (2007-2008), IEA de Nantes (2012-2013), and the Alexander von Humboldt Stiftung (2013-2014). Aside from that, he received several awards, including most recently a research grant from the Gerda Henkel Stiftung and the American Philosophical Society. He has appeared on a number of film documentaries in the US and Europe as a specialist on Jerusalem, Jesus in Islam, and Muslim-Crusader relations. He is former president of the Middle East Medievalists, and board member of several academic and public organizations.

Rozenn Le Merrer graduated in history, art history and exhibitions from the University of Rennes 2. She worked as curator at the Rennes Museum of Brittany, at the Roche Jagu cultural centre and in an agency specialised in museography, before joining l’École Supérieure des Beaux-arts in Nantes in 2003. After working there as director of studies from 2004 to 2013, she was appointed director of development and attractiveness to coordinate the inaugural program of the new art school on Ile de Nantes, the city’s creative district. In the course of her work, she has defined and implemented the reform of European higher education and the development of partnership policies with the city’s graduate schools, l’Université de Nantes and cultural and arts players from around the region. She has also developed international university cooperation programs, in particular with Korea, Japan and Senegal, and coordinated a teaching program designed for foreign students wishing to study art in France. Since September 2017, she has been director of the Nantes site of the Nantes Saint-Nazaire school of fine arts.  She will be joining the management team of the Foundation from 15th October.