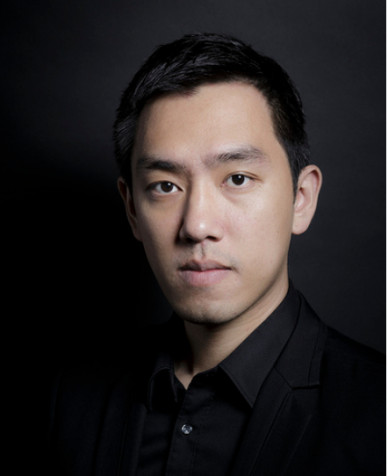 I believe that artists must begin contemplating and establishing a creative symbiosis between culture and technology, since our way of life is being continuously transformed by technical advances. For example, the creative philosophies of France seek innovative possibilities by continually constructing dialogues between emotion and rationality, making it possible for France to maintain a pursuit of elegance that keeps pace with the advancements of technology. Thus, I am motivated to explore how France has maintained a spiritual abundance along with technological innovation. I am certain this is a challenge and topic that Taiwan, also renowned for its development in science and technology, will face in the near future.

Starting from this inquiry, I attempt to respond with my core work - the Cosmos of thoughts series. Generated using computer programs and algorithms, I learned about the logic behind the generation of new species in nature to depict works of image and space with extremely vast scales and fine details, and challenge the top-down tradition behind artistic creation as well as the model of “artists & artworks = creator & creation”. In this manner, to become the creative conveyor, the perspectives and environments of the artist’s mind and body may alter, becoming new creative genes that evolve into new possibilities, just as species in nature evolve and adapt to different environments.

Historically speaking, art has come from a past in which it primarily served religions and monarchies to the current era of the Internet in which global hierarchies are becoming flattened.  Now, we find ourselves at a cross-generational turning point. As the world stands on the verge of falling apart due to the new pandemic, artistic creation should have a new mission – to reconnect human relationships before the world reaches a breaking point. This task requires a dialogue beyond words, a sensation that touches human hearts. By integrating my experiences in France, I look forward to unleashing the possibility of such a sensibility through my specialty in rational contemplation.

In 2009, I visited France for the first time to study architecture.  Due to the lights of Paris, I developed a sensitivity to the art of imagery.  After just a week of creation, I organized my first solo exhibition of Paris, Build / a world in the eye. After continuing to travel and study around the world, I founded a professional imagery company after returning to Taiwan.  Even now, however, I still long for opportunities to return to and create art in France, where I found my original inspiration through my training. My architectural background drives me to continually focus on the dialogue between artificial and natural. After twelve years creating photographic works, I launched my Cosmos of thoughts series.

The initial creative concept behind the Cosmos of thoughts series is a search for pure original fixations - returning objects to their essence, while bringing paintings back to the very origins consisting of one point and one line, just as the origins of life as cells carrying a genetic sequence grow into complete individuals. Through dots and lines in the artwork, the DNA of a digital entity enables it to grow by itself, just as each thread of thought is endowed with different souls that gradually become the shape for a boundless universe.

The work unfolds along with human thoughts, coinciding with the compulsory requirements of existence proposed by René Descartes. According to Descartes’ arguments, the universe consists of two worlds - one of material and another a gateway to the universe of the mind. When humans begin to work with machines, rational science and sensible perceptions are then opened.

Liu Cheng-Hsiang was born in Taichung, Taiwan in 1986. He graduated from the Bartlett School of Architecture UCL in London. His works continuously reflect and dialect the essence of life and the relationship between artificial being and nature over the past ten years. His photography work “Build / a world in the eye" has won awards and been published in many countries around the world. The generative artwork "Cosmos of thoughts" echoes the characteristics of Taiwan’s science and technology, and has been selected for the Kaohsiung Award, the Tainan New Art Award, and the MIT New Artist Recommendation of the Ministry of Culture. In 2021, he was recommended as the representative visiting artist to France from Taiwan by Taipei International Art Village.

Liu is the founder of Shawn Liu Studio and has been its director since 2016. The studio is a visual consulting firm, which is deeply involved in the field of visual creation and exhibition design. The studio is mainly responsible for the creation of large-scale public constructions and cultural-related images in Taiwan, including museums, transportation, industry, campus and art, as well as their related short film production and exhibition. Liu also served as a visual art and design lecturer at national and private universities in such as National Cheng Kung University ,National Yangming Jiaotong University in Taiwan and oversea The Hong Kong University of Science and Technology.

Liu Cheng-Hsiang’s digital art has been exhibited extensively with acclaimed Taiwan art institutions and organizations including National Taiwan Museum of Fine Art and Kaohsiung Fine Art Museum. Cosmos of Thoughts was the winner of Tainan New Arts Award (2019) and the National Ministry of Culture MIT New Art Recommendation (2019). He currently lives and works in Kaohsiung, Taiwan. In September 2021, Liu has been selected as the resident artist of Young-Artist-in-Residence@V54 scheme organized by Po Leung Kuk, which not only houses his first Hong Kong art presentation, but also offers the artist a rare opportunity of local community exchange. Cosmos of Thoughts and the program centered around the art series are part of the “Y-Lot SciTech series”, designed by the charitable organization to increase accessibility to Science and Technology initiatives. In 2022, Liu participated the International Artist Exchange Programs of le lieu unique in Nantes, France.

2014-Present  "Build a world in the eye" series has awarded by the 2018 Art Exhibition of Chiayi City;
The firstprize of the 2014 American IPA Modern Art Still Life;
In 2016, the second place of the architectural work of the French PX3 professional group and various honorable awards;
2015 Russian MIFA architectural honorary award; 2015 Sweden 1X Architectural Image People’s Choose award;
and other various cross-cultural variables.

2009-Present  Established The professional team of Shawn Liu Studio which focuses on the field of visual arts and design fields,
in addition to the studio’s own creative efforts, the team execute the creation of photography projects of large-scale public                        construction in Taiwan,
including museums, transportation, industry, campus and art.

2015                Graduated from The Bartlett UCL, Master of Architecture with Distinction award, London UK,
the design work was published in the same year to New York.