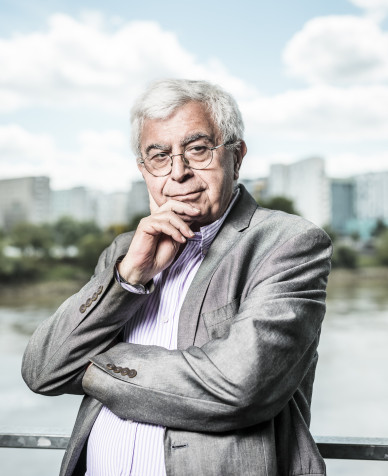 Elias Khouri is a lebanese writer, editor and professor. Born in Beirut 1948, he finished his studies at the lebanese university of Beirut, and was a Global Distinguished Professor at New York University.

He published 13 novels, 4 books of litterary criticism, and articles in international journals. His novels are translated into 15 languages.

Besides being a public intellectual, he was the artistic director of the theatre of Beirut, and the co-director of the Ayloul Festival for Contemporary Arts.

Elias Khouri be starting the third volume of his trilogy « Children of The Ghetto »,with the title « The Present-Absent ». In this third volume, the author continues his investigation of the palestinian condition, which represents the exile of the Men in a postmodern world that has lost its values. Why the Present is absent ? This theme epitomise the refugies, the uprooted, and the marginals of our time.

The projects sets out to explore the language of politics in conflict zones through literature and translation. It is co-authored by Lebanese writer Elias Khouri and Israeli sociologist Yehouda Shenhav-Shahrabani and it is envisioned as a three-year program in association with IAS-Nantes. Per proposal, Khouri and Shenhav-Shahrabani will both be invited as associate fellows to the institute, and while the pair may widely diverge intellectually, their respective bodies of work nonetheless share common ground to foster a mutually beneficial dialogue. Living and working together for several months, each year as associate fellows will allow Khouri and Shenhav-Shahrabani to tackle different perceptions on various issues, and to disseminate their insights through writing, workshops and public lectures. In the first year, the two will spearhead a team of translation of Khouri’s novels, based on Shenhav-Shahrabani’s theorization of the concept  as specified in his book, Laborers and Actors in Translation (2020,Hebrew).

In year two, they will lead a workshop on the representations of violence in literature in conflict/colonial zones with Khouri’s novels used as case studies. In the third and final year, the workshop will take on a team of translation of Palestinian Nakba literature as a test case of one such instance of historic violence.