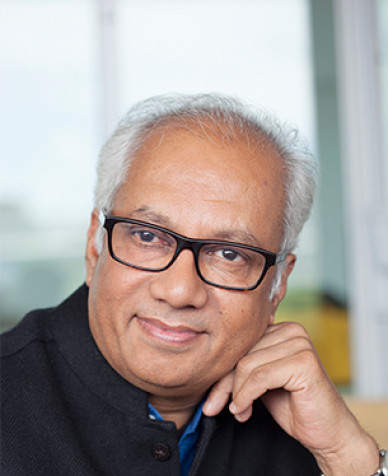 During his residency Atul Dodiya proposes to paint a series of small scale paintings/drawings on paper as a playful experiment in reversal from his current studio practice of exploring almost « cacophnic », extreme, diverse images on large metal shop-shutters. This tenure will allow a time for meditative observations. The image of Saints in European painting and the depiction of Krishna in the Bhagavad Purana are very much on his mind.

In recent years he has written and published creative text in Gujarati and plans to continue his writing during the fellowship.

Widely considered as one of India’smost significant artists,Atul Dodiya was trained in Mumbai, at Sir JJ School of Art, 1982 and École des Beaux-Arts (Paris),1991-1992

He became known in the Nineties for hyperrealist paintings depicting middle-class Indian life and for his watercolour series on Mahatma Gandhi. His paintings are populated by diverse traditions in painting, the written words, images from the media and of saints, legends, national history, political events, traumata and autobiograpical narratives. His allegorical paintings on canvas or metal roller shutters and watercolours may be aggressive or poetic.

Atul Dodiya has had more than 30 solo shows in India and abroad, which includes a mid career retrospective at Japan Foundation Asia Centre, Tokyo in 2001, a solo show in Reina Sofia Museum, Madrid in 2002, Contemporary Arts Centre, Cincinnati, US in 2013, a major survey show of his work held at the National Gallery of Modern Art, New Delhi, 2013.

2016, “An Artist’s Jugalbandi wit Art Viewers: Conversation with Atul Dodiya and Essay as Postcript to the Conversation by Naushil Mehta and Foreword by Tasneem Zakaria Mehta for the exhibition “7000 Museums: A project for the Republic of India” Bhau Daji Lad Museum,Mumbai